Every January we celebrate Dr. Martin Luther King Jr. Day, honoring the achievements Dr. King made as a leader of the Civil Rights Movement. Dr. King’s legacy inspires us to continue working towards diversity, equity, inclusion, and justice. His important work has impacted so many areas, including adoption.

Most people have a general understanding of what adoption is. Even if they don’t personally know anyone who was adopted or has adopted a child themselves, are likely familiar with the idea that adoption means a child was “given up” by their biological parent and is raised by their adoptive parent. With this general understanding of adoption comes common terms that people typically use when talking about it. We’ve already mentioned one, “giving up” a child, but there are many other sayings that are regularly used, like “real mom/real dad”, “put up for adoption”, or “gave away for adoption”.

As we have previously shared on the blog, November is National Adoption Month. A time to spread awareness about the impact of adoption and uplift the voices of those who have been touched by it. Today we share the story of ACFB board member Julie Ryan McGue. Julie is an adoptee and author of the… END_OF_DOCUMENT_TOKEN_TO_BE_REPLACED

For those who may not know, November is National Adoption Month. A month where we raise awareness about what adoption can truly look like. One of the best ways to learn about adoption is by hearing the stories of members of the adoption constellation – adoptees, birth parents, adoptive parents, and all those who have been impacted by adoption.

Adoption is part of many people’s stories in different ways. From adoptees to birth families, to adoptive families and more, adoption touches the lives of many people. ACFB is grateful to have a board of directors that all have personal connections to adoption. Today, we’re introducing our board members and sharing a little about their… END_OF_DOCUMENT_TOKEN_TO_BE_REPLACED

“If it is to be, it is up to me.” – William H. Johnsten Considering an adoption plan for your child is an incredibly difficult and personal experience. There are many factors that go into an expectant parent’s decision to place. They may not have the financial resources to give their child the life they… END_OF_DOCUMENT_TOKEN_TO_BE_REPLACED

Waiting to adopt can be a long and emotional process. At times it may feel isolating for families who do not know anyone else who has been in their shoes before. Sometimes the best support can be hearing that another person has gone through something similar. ACFB recognizes the benefits of this type of support,… END_OF_DOCUMENT_TOKEN_TO_BE_REPLACED

The journey to build a family though adoption is filled with ups and downs. As families go through the home study process, their social workers do their best to prepare them for what they may face along the way. At that early stage in the adoption process, it can be difficult to fully grasp exactly… END_OF_DOCUMENT_TOKEN_TO_BE_REPLACED

Over the last several decades, open adoption has become the norm in the United States. The benefits are clear for everyone involved – birth parents, adoptive parents, and the child. Through open adoption, children are able to have a better understanding of their story and a stronger sense of self. It allows adoptive families to… END_OF_DOCUMENT_TOKEN_TO_BE_REPLACED 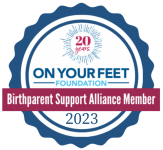