National Adoption Month – An Adoptee’s Story of Searching for Family

As we have previously shared on the blog, November is National Adoption Month. A time to spread awareness about the impact of adoption and uplift the voices of those who have been touched by it. Today we share the story of ACFB board member Julie Ryan McGue. Julie is an adoptee and author of the award-winning memoir, Twice a Daughter: A Search for Identity, Family, and Belonging.

After struggling with infertility, Julie’s parents began to consider other opportunities for growing their family. Julie and her identical twin sister, Jenny, were adopted at three weeks old through Catholic Charities. Their parents later adopted their son and had three biological children. Although Julie, her sister, and their brother had closed adoptions, their parents chose to raise them with the understanding that they were adopted.

With no information about her background, Julie always had a curiosity about her birth family. When she was thirty years old, she decided to try searching for her birth parents and wrote a letter to Catholic Charities requesting information. Unfortunately, at that time adoption laws were very restrictive. She received a one-page response saying no information could be shared. Julie assumed that meant it was a dead end and decided not to pursue her search any further.

Nearly two decades later, Julie was sent for a breast biopsy after a concerning mammogram. She considered the possibility that she could have a biological family history of breast cancer. Disheartened by her previous attempt to search for her birth family, she was not eager to try again. Thanks to the persistent encouragement from her husband, Steve, Julie decided to revisit her search. Remarkably, adoption law in Illinois had changed since her last attempt, allowing her to access her original birth record. However, when she received her record, she learned that there would be many more hurdles – her birth mother had used an alias. At this point, Julie had committed herself to the journey. She had unlocked a strong desire to learn her history, and, with the support of her loved ones, she felt she must continue to push forward. In her memoir, she details the long road and many obstacles she faced trying to find more information. From sending inquiries to Catholic Charities, to contacting a genealogist, to working with ACFB’s own executive director, Linda Fiore, who at the time was a Confidential Intermediary for the Midwest Adoption Center, Julie tried every possible opportunity to learn more. Her search was long, exhausting, and at times disheartening, but with much perseverance, Julie eventually made contact with her birth mother and later with her birth father and half siblings.

Julie encountered many highs and lows throughout her search to find her birth family, which she details in her memoir. The roadblocks and restrictive adoption laws made her feel helpless at times, but the support from those close to her inspired her to keep trying. She is grateful to her husband for pushing her when she wanted to give up, her mother-in-law for being her constant cheerleader, and her twin sister for understanding her need to find their birth family.

Although her parents had always been open about the fact that they were adopted, Julie felt that they were not fully earnest when they said they would be supportive of her finding her birth family. By the time Julie began her search, she was nearly 50 years old, and her mother likely thought she was never going to try to find her birth family. But Julie did, and it proved to be really hard on their relationship. The lack of genuine support from her mother made it challenging for Julie to navigate her search and share this momentous experience with her family. Through a lot of work, painful conversations, and commitment, Julie and her mother brought their relationship back to a good place.

That experience showed Julie an important side of the adoptee experience – one she hopes all adoptive parents can learn from. The way parents react to their child’s desire to connect with their birth family can have a huge impact on their relationship. Although it may be challenging and scary, it is vital that the child feels unconditionally supported by their parents. It can be helpful to consider things from the adoptee’s point of view. Julie shares, “We didn’t choose to be adopted. We’re in it. We’re trying to make it work. We’re trying to know both sides of the equation – the family that we’re raised in and the family that gave us life. To make us feel guilty about our curiosity is not good.” Their desire to know their birth family does not mean they love their adoptive parents any less or that they are trying to replace them. Birth parents and adoptive parents have very different roles in the adoptee’s life, but both can be incredibly important to helping the adoptee feel connected.

Another lesson Julie learned through her search is that adoption laws do not make it easy for adoptees to find their history, especially in closed adoptions. She was fortunate to connect with her birth family, but she recognizes that is not the case for many adoptees who come from the closed adoption era. This is one of the reasons why Julie has become such an advocate for open adoption. Reuniting with her birth siblings has enriched Julie’s life in so many ways. She recognizes the many benefits having a relationship with birth family can bring, not only for the adoptee, but for their birth family and the adoptive family, too.

Since their reunion, Julie and her birth siblings have developed a beautiful relationship. They have marveled over their many similarities despite growing up in different households. They share the same smile, sense of humor, and athletic abilities. Their families have also bonded together, and they have discovered connections they had to each other long before they knew they were related. Julie shares that the connection she has formed with her siblings has been incredibly fulfilling and is the best part of her search story.

Since writing her memoir, Twice a Daughter: A Search for Identity, Family, and Belonging, Julie has been active in the adoption field, both as an ACFB board member and a guest speaker on adoption panels. She is passionate about amplifying the voices of birth parents, adoptees, and adoptive parents to help share new perspectives and dispel myths and misconceptions about adoption. Julie is also working on a second book which will be the prequel to her story about her search and reunion. It will focus on the importance of how a consistent sense of belonging within a family – whether formed through birth or adoption – is essential for getting through the challenges that life throws at us. To stay updated on Julie’s work, visit her website www.juliemcgueauthor.com or follow her on social media @JulieRyanMcGue on Instagram and @JulieMcGueWrites on Facebook. Her book, Twice a Daughter: A Search for Identity, Family, and Belonging, can be purchased here. 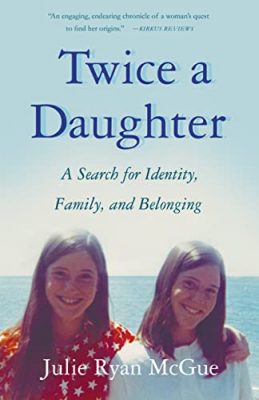 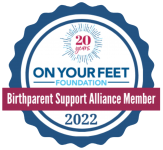